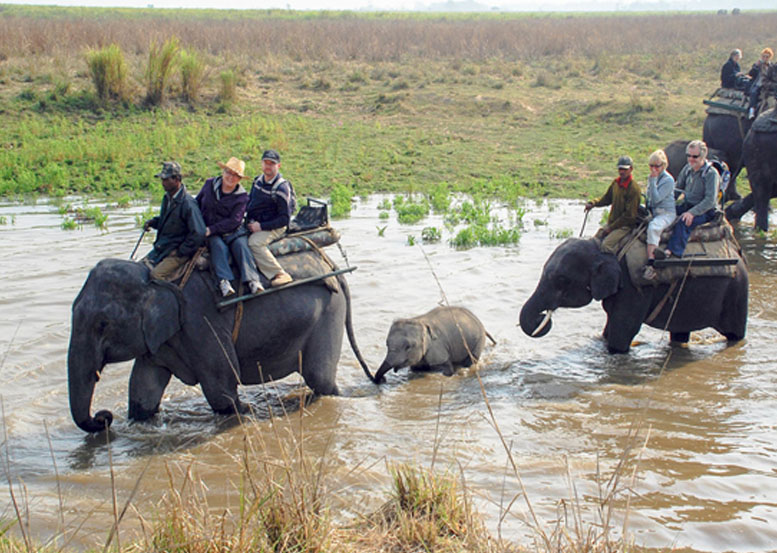 The tour of Eastern India is designed to give the discerning traveller a great option of visiting the culturally rich destination like West Bengal; the Kaziranga National Park; a working Tea Estate in Assam, as also the Himalayan Indian state of Sikkim.
Your first port of call is Calcutta (Kolkata), where you shall be staying at the grand dame of Chowringhee, the Oberoi Grand, followed by two days of most interesting sightseeing, tasting of Bengali Cuisine, shopping and also, particularly for the British, a nostalgic revisit to the Heritage zone…poignantly symbolised by the statue of the old Dak-runner, clutching a spear in one hand, a lantern in the other, with a mail sack slung over his shoulder, the fulcrum of communication network of the empire.
From Calcutta a short flight takes you to Dibrugarh, where you will stay at a working Tea Estate, in a massive colonial era Planters Bungalow, reliving the charms of an era gone by. These Bungalows are built on stilts, popularly called Chang Bungalows. You shall have a chance of tasting & grading the various teas that are being produced on the estate and processed at the Tea factory.
No visit to Assam is deemed complete without a visit to the Kaziranga National Park, spread over 430 Sq. Km set within the flood plains of the mighty Brahamputra river. It has the largest population on Indian one-horned rhino and a large population of tigers and wild elephants. The extensive grasslands and interconnecting streams makes it exceptionally beautiful and remarkably different from the other tiger reserves in Central India! There is large variety of birdlife, of over 400 species.
At Kaziranga, we suggest you stay at the Diphlu River Lodge.
This Trip can be extended to include the Hornbill Festival of Nagaland, held every year in the first week of December.
It can also be coalesced with visit to Sikkim, for a stay closer to the Himalayas.

We trust your family, your friends & you are all well and in good health, confronted as we are by Covid-19.

India is yet struggling to contain the infection. However, we are happy to write that the recovery rate is very healthy and very soon we will come to terms with the deadly virus. We expect this turn around by October/November 2020.

We are already looking forward to having our valued customers, our patrons with us, once the pandemic subsides, and international air traffic resumes.

Keeping in view the seriousness of the safety measures, we all need to adopt and fastidiously apply, we have devised our own Guidelines with respect to travel by car / coaches. These are as under:

Our commitment to cleanliness and hygiene

To ensure utmost care & safety of our Guests, the following process will be in place in Stage-2:

Trust us to take you places, just as we have for over 20 years.